How To Figure Out the Secret Thoughts of Your Dog

If you’ve ever tried to figure out what your dog is really thinking, Chris Rozzi can help with that. Chris is the artist and comedian who wrote the book “Tiny Confessions: The Secret Thoughts of Dogs, Cats, and Everything” that’s full of the innermost thoughts of our four-legged family members. 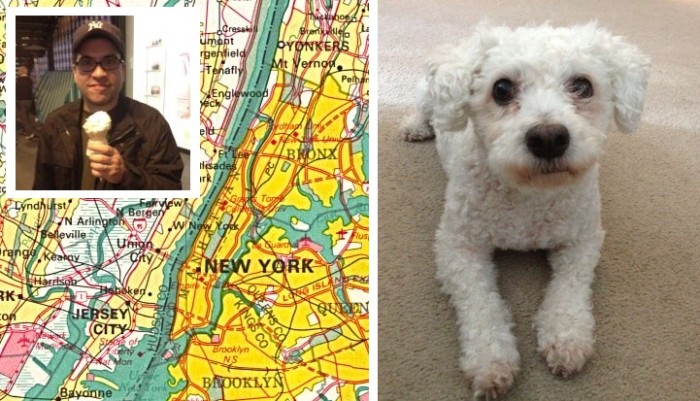 Chris grew up in Pearl River, NY where his first experience with a dog was with his family’s Yorkshire terrier, Shag. Chris was just 4 or so when Shag came in his life but being around Shag gave Chris a love of pups that would carry through to adulthood. 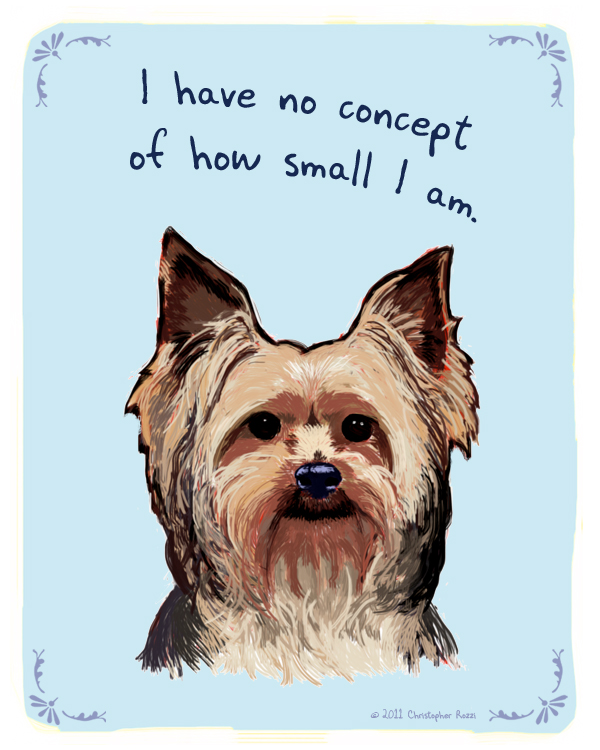 Today Chris lives on Manhattan’s Upper West Side with his wife Pauline and their Bichon pup, Willie. Chris describes Willie as a furry little clown with a black nose. Chris also notes that he has many “sickening” nicknames for Willy. “If anyone besides my wife ever heard them, they would rightfully have me arrested for Pet Owner Cutesiness. Is that a crime?” 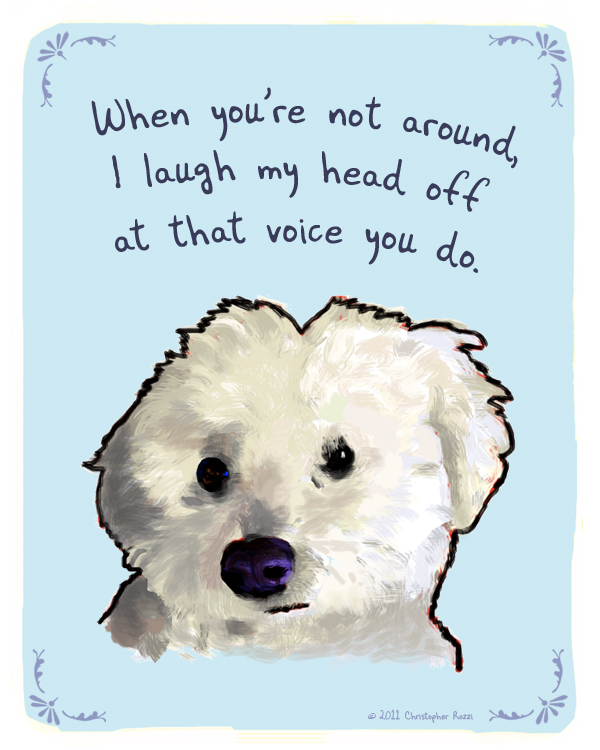 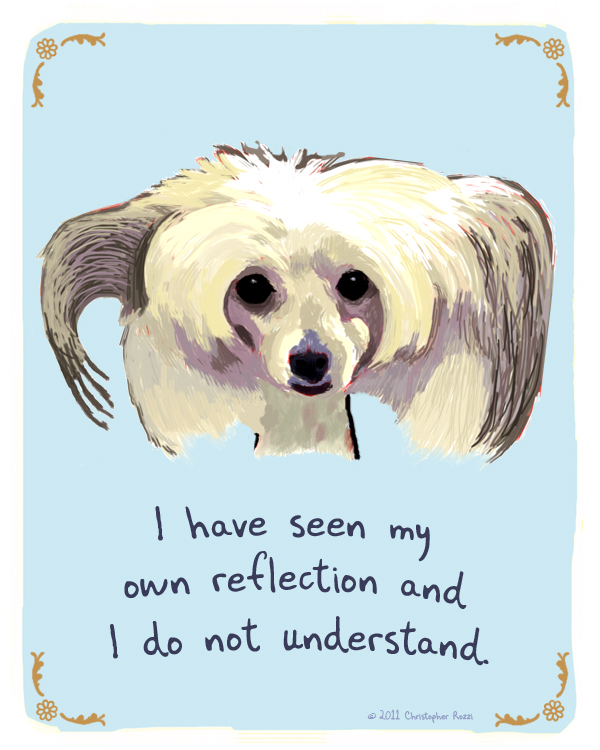 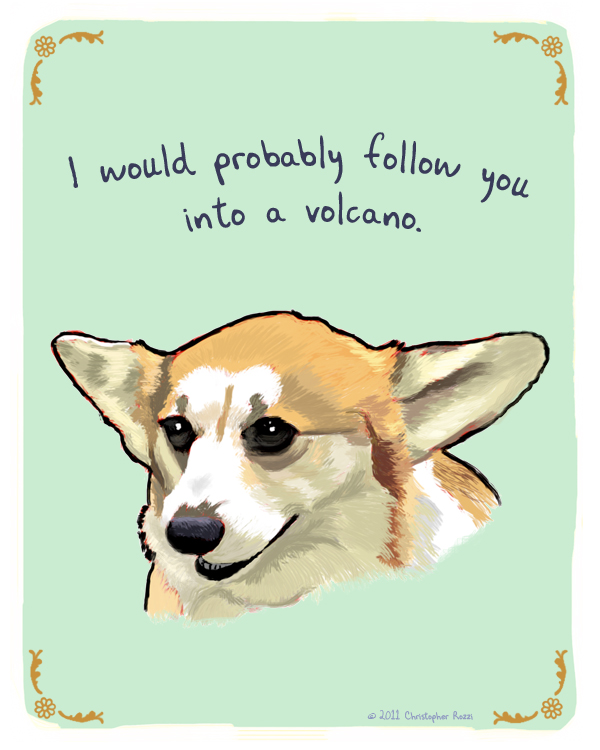 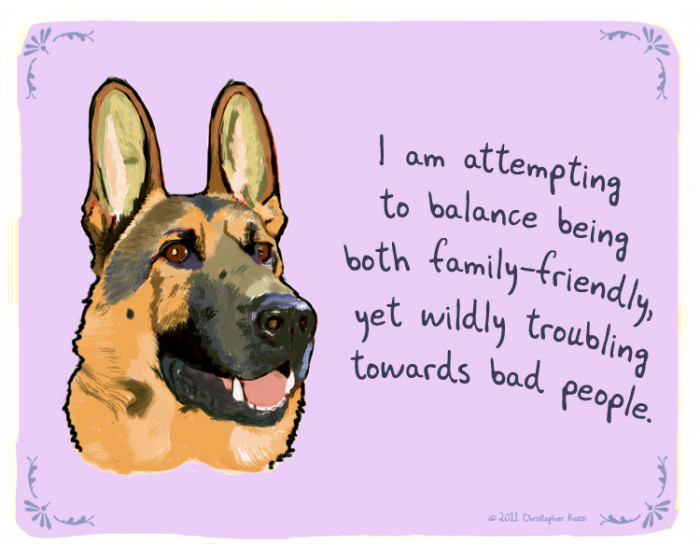 Today, Chris says that he can’t imagine what life would be like without Willie. “He’s ridiculous,” Chris says. “He’s got a very expressive face that will stare you down out of the corner of his eye when he wants something. When he’s fed up, he’ll pretend to sneeze in protest.” 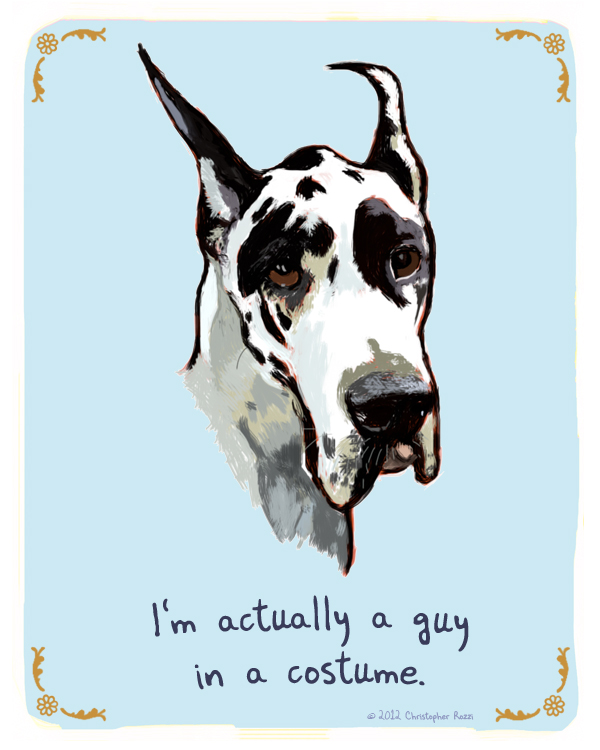 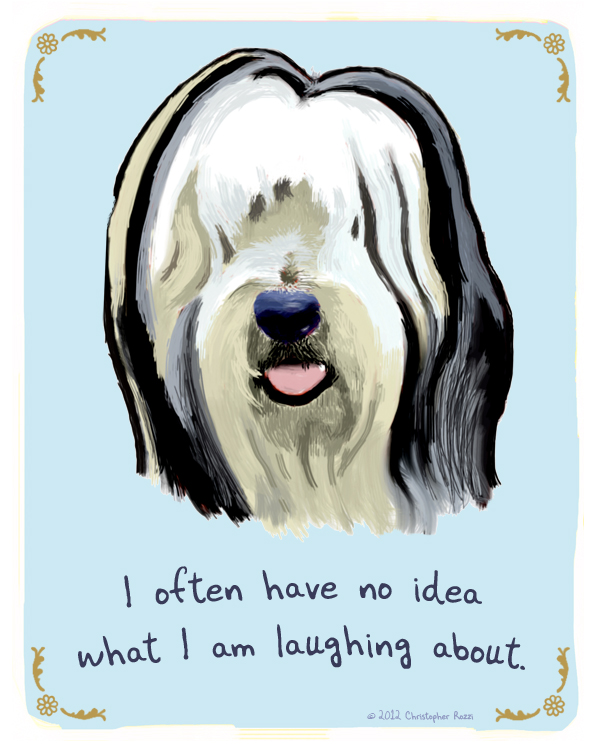 Chris really started giving a voice to those who don’t speak English when he was walking Willie around the streets of New York, imagining what he might be thinking. As Chris pulled upon his comedic background of rewriting life when he tried to find motives for Willie’s actions, Tiny Confessions began. 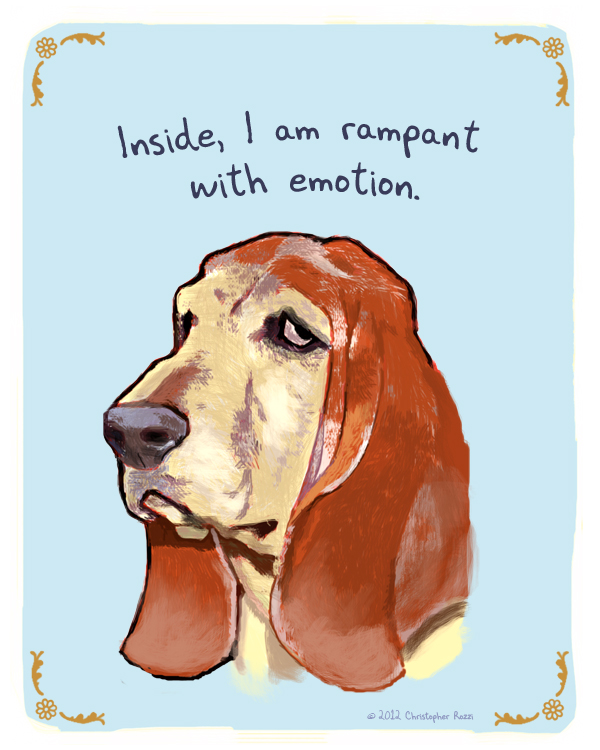 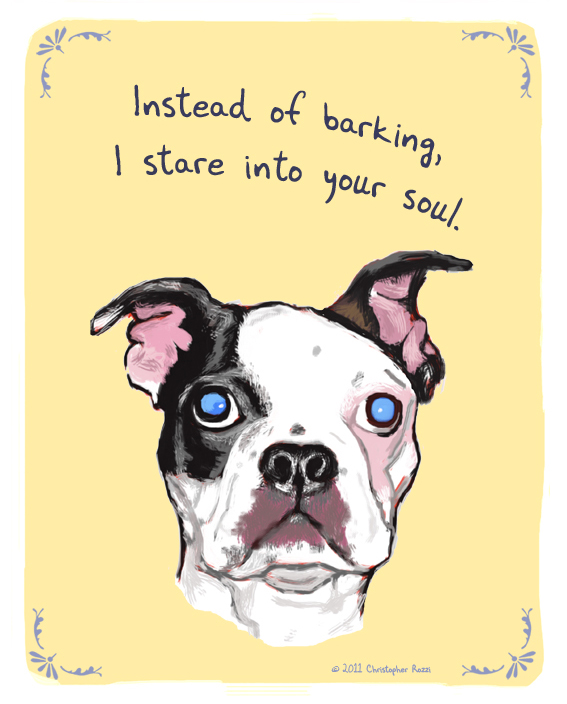 Just as Chris’ love for dogs started at an early age, Chris has also been drawing since he was really little. When he was a kid in school, he used to impress his classmates by drawing a simple Snoopy. When Chris grew older, he continued to work with art and comedy and Tiny Confessions was his way of naturally combining the two. 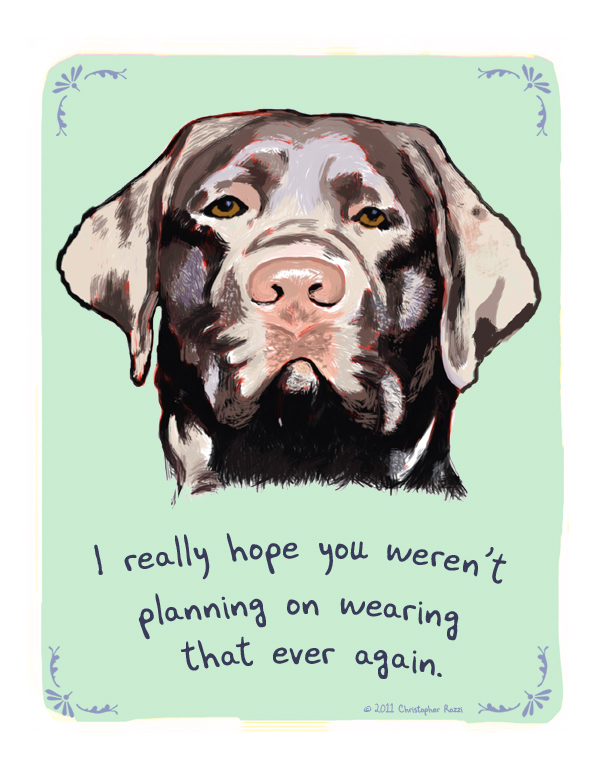 Chris’ process for creating each Tiny Confession starts when he takes a photo of someone’s dog or they send one to him. Chris then creates a digital painting on his iPad. People provide Chris with personality traits about their pet or he researches the breed to come up with their confessions. Occasionally he’ll take a trip out to Brooklyn to walk around and think them up. 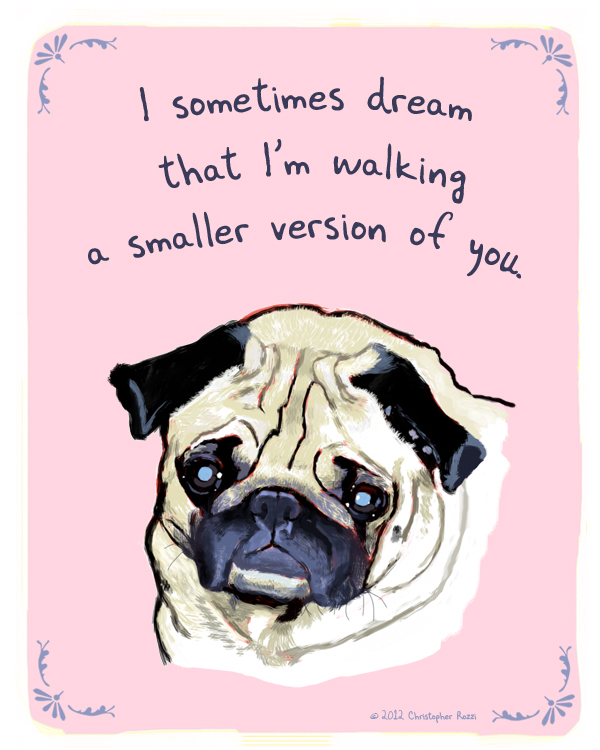 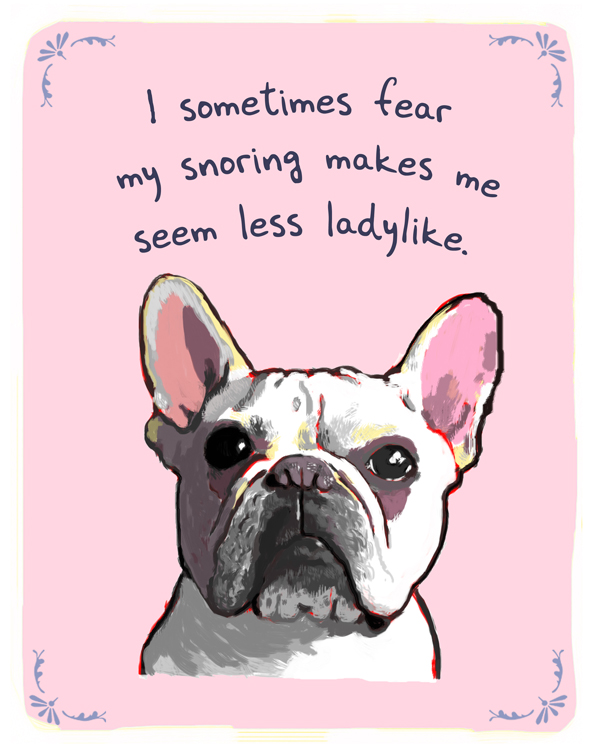 Chris started selling prints in his Etsy shop, until one day Marian at Perigee/Penguin reached out to him after seeing his work online and asked if he wanted to make a little gift book. 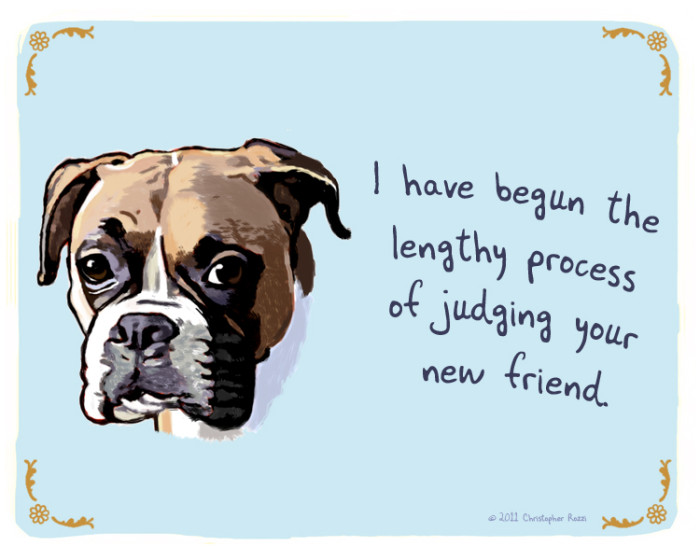 When asked what it feels like to be published, Chris says, “You can’t help but feel a little pride seeing your book on the shelf and knowing that people are enjoying it, maybe showing their favorite Tiny Confessions to one another. That’s really what it’s all about.” 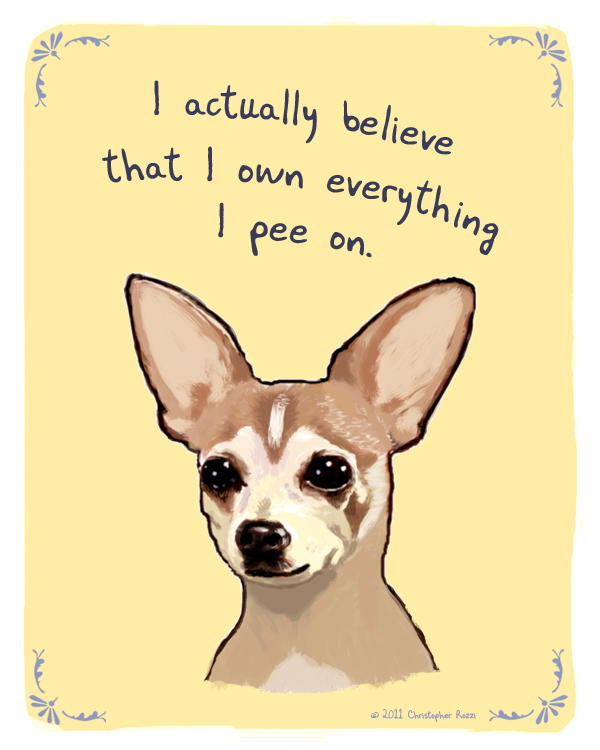 Here in the BarkBox office, we were so tickled by all of the other Tiny Confessions that we asked Chris to take a stab at one of our office pups, Ernesto. Ernie is our favorite, somewhat grumpy, Puerto Rican rescue pup who inspired Hump Day as a national holiday. 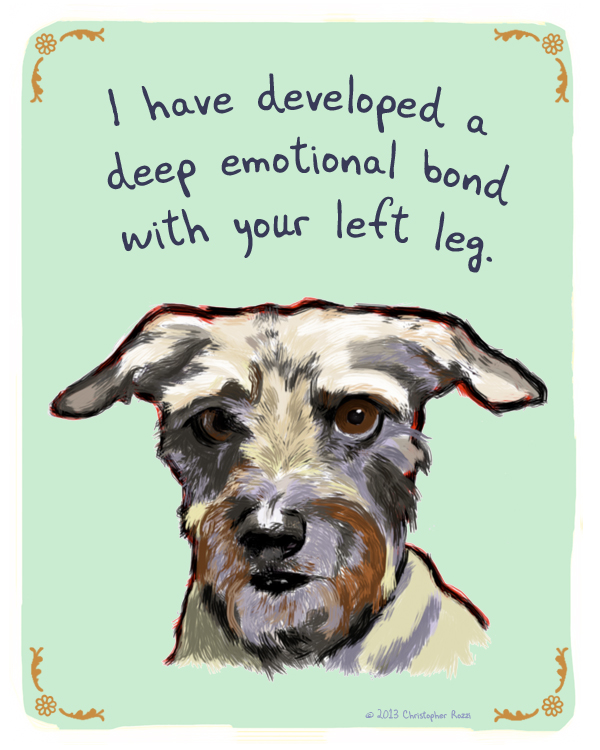 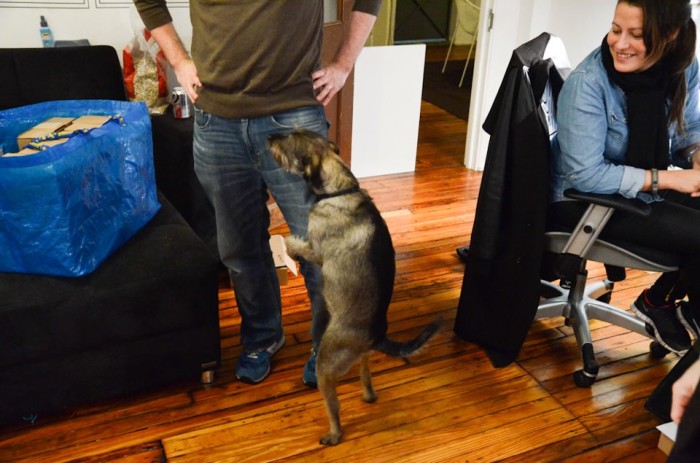 If you’d like to give Tiny Confessions as a gift or get it for yourself, you can find it on Amazon! 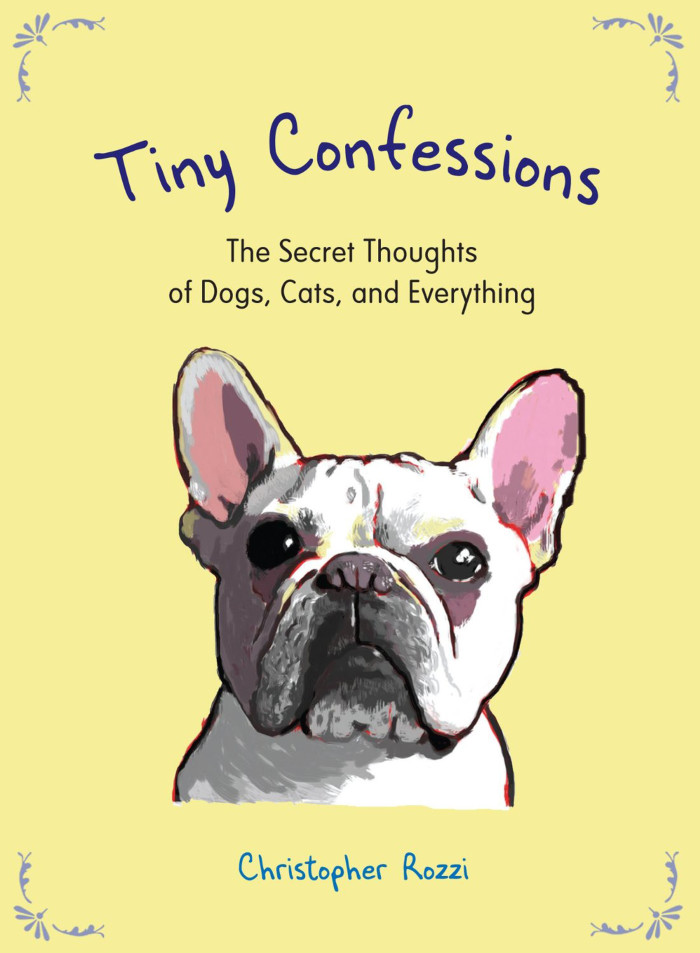 You can also find Chris over on his website, TinyConfessions.com where he also draws *gasPPPP* cats. ; )