Kristen Campbell was returning from a day of tubing on Vermont’s Little River when her car ran off the road and hit a tree. Luckily, she and her passenger – 5-year-old Golden Retriever, Murphy – were not seriously injured. When Kristen opened the back door to check on Murphy he did what many dogs who experience the trauma of a car accident do – he fled. But no one could have predicted that it would take more than a year-and-a-half plus the efforts of an entire community to bring Murphy home. 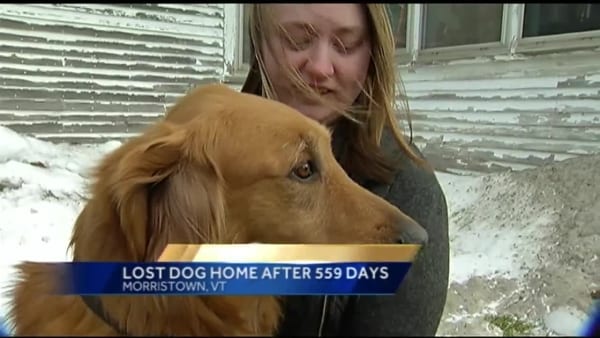 Pat and Ed Hamel are Kristen’s grandparents and Murphy’s owners. They fondly recalled how Murphy loved to spend his days watching Pat cook and fetching her slippers on demand. He went for daily walks through the woods around the Hamel home searching for moose antlers with Ed, never requiring a leash. The couple knew they were not going to give up until their beloved dog was home safe. For 19 months, friends and family of the Hamels scoured the town of Waterbury where frequent “Murphy sightings” were reported. The terrified pooch was spotted outside the famous Ben & Jerry’s factory, at a local construction site, and by another dog lover who reported watching Murphy bolt out of the woods to retrieve a dummy she had tossed into the water while training her own bird dog pups. Waterbury citizens took to leaving out food for Murphy and setting traps for his capture. 64-year-old Ed spent several nights hiding beneath an overturned canoe with a net gun, ready to ensnare Murphy should he appear. Favorite squeeky toys were carried during searches, as well as blankets carrying the scent of Pat’s perfume. The Hamels even hired a pet detective and an animal psychic, but all efforts failed to rescue Murphy. Local animal control officer Erika Holm believes that the trauma of the crash sent Murphy into “survival mode” causing him to see even his owners and friendly neighbors as threats to his survival.  Despite his local folk status, Murphy’s situation was no laughing matter. He spent a frigid and treacherous Vermont winter eluding capture during the 19-month ordeal. Starvation or death by freezing were real possibilities. Then one evening, Associated Press reporter Wilson Ring spotted Murphy from his kitchen window and devised a plan. He began to leave out bowls of food, luring Murphy closer and closer. Ring contacted Ed and together they built an elaborate trap. They allowed Murphy to grow comfortable eating inside the contraption before ever trying to trigger the trap door, but each failed attempt to ensnare the dog meant weeks of rebuilding Murphy’s trust. Finally, after months of perseverance, Murphy was captured inside Ring’s trap. Some feared that Murphy may have turned reactive as a result of the ordeal, but when Ring approached, the dog timidly licked his hand through the mesh. Animal control officer Helm slipped a harness and two leashes onto Murphy as the dog lapped her face. He was reunited with the ecstatic Hamel family that same night, and was sleeping at their feet by 3 A.M. Miraculously, Murphy was perfectly healthy and unharmed except for a few burs caught in his tail.  The Hamels suspect that he actually gained weight during his adventure thanks to all the neighbors who left out food for the elusive stowaway! Although Murphy’s story had a long awaited happy ending, it could have ended tragically instead. Dogs should always be restrained safely inside of vehicles to prevent injury and fear-induced incidents like Murphy’s.

H/T and Featured Image via bostonglobe.com