These Brave Dogs Left Home To Serve Their Country

The bond between dogs and humans is at least 30,000 years old. Dogs have helped humans with everything from hunting to herding, and most importantly, companionship.

Although dogs have long since served in armies dating back to ancient times, the U.S. military didn’t start actively using dog soldiers until the early 1940s. The military realized that dogs could do things that humans could not, like sniff out land mines. When the U.S. was attacked at Pearl Harbor in 1941, the US military only had a few soldier dogs, which were Huskies stationed in Alaska. Because the military realized how helpful pups could be right around the time that the US was attacked, the American military was in a bit of a pickle to find and train some canine soldiers. To get the 125,000 canine soldiers the war effort needed, the military sent out a call to Americans to loan their dogs to serve beside American troops. This was a time when Americans did everything they possibly could to help the military. Rationing food, donating scrap metal, growing victory gardens– and loaning the family pet for service. These household pups were trained to be sentries, scouts, messengers, or mine detectives. The military also taught them things like perfect obedience and to attack when ordered and grab a trigger arm if a gun was around. When people volunteered their pups, the military warned folks that their dogs might come home with a different personality– they said to not be surprised if their dog came home “a killer.” Throughout the dogs’ tours of duty, some handlers and trainers sent letters home to their owners for Christmas and to inform them of their dog’s performance throughout the war. “Rex, a scout dog, gave warning of the presence of Japanese near a Marine position during the night of the seventh day of the operation. At daybreak the Japanese attacked our position. As a result of ‘Rex’s’ warning, the Marines were prepared for the attack of the Japanese and were successful in repelling it. ‘Rex’s’ action was undoubtedly instrumental in saving the lives of many Marines.” But many did. Newspapers at the time publicized that war-trained dogs would be “deprogrammed” before being discharged with lots of petting and cuddling. Even though the dogs didn’t know what the war was for, they did what they’d been asked to do. As always. 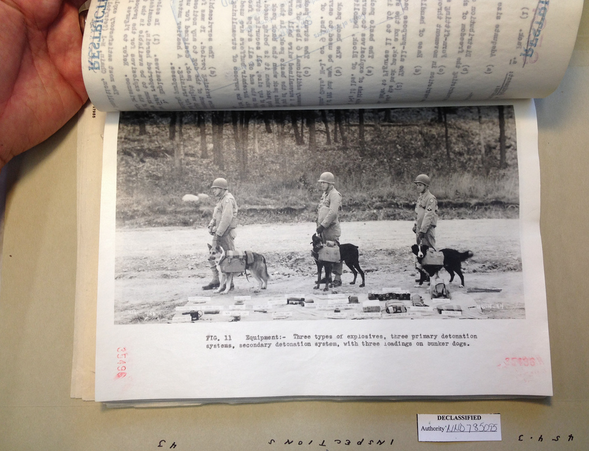 These four-legged civilians helped end a global and deadly war. They came from the back yards of small towns and big cities and exhibited the blind loyalty, courage, and intelligence that only a dog can possess– forever deepening the intricate bond between our two species.

For more info on this story, listen to the incredible podcast on This American Life.