What Are Fluffy Dog Breeds?

What Are Fluffy Dog Breeds?

If you’ve been thinking of investing in some fancy new, fluffy pillows or velvety soft throw blankets, you should skip that trip to Crate & Barrel and adopt a new furry friend instead! Fluffy dogs are the perfect solution. Just kidding. Kinda. But in all seriousness, the training, grooming, and brushing is well worth it to experience their fluffy coat!

If you live somewhere with long, cold winters — or just like being extra warm and cozy — a fluffy pooch can provide great foot warming services and top-notch snuggle sessions. Here are 22 fluffy dog breeds guaranteed to fluffify your life. Poms derived from the Spitz breed, so they are essentially heirs to their fluffy thrones. Notoriously nicknamed Pom-Poms, Fluffbutts, the Prince of Puff (okay, maybe I came up with that last one) these tiny, super intelligent pups are the perfect loyal lap dog. Samoyeds are gentle giants that come from Siberia where they pulled sleds and blended in with the flurries of fluffy, white snow. These pups will chill on the couch with you and you’ll never need a blanket again. Chow Chows originate from China where they were referred to as “Songshi Quan” which means “puffy-lion dog.” As one of many big fluffy dog breeds, Chows have a double coat that is super thick around their “mane” and they have very distinctive blue tongues. Also, the puppies look like walking teddy bears, so if you want everyone around you to die of cuteness, a Chow is the way to go. Bearded Collies are herding dogs that often times get mixed up with Old English Sheepdogs. They have long hair and are famous for their dapper beard, which gives them the nickname “Beardie.” Ever wonder what breed Nana was from the original Peter Pan? A Beardie!

Speaking of celebrity dogs, how about Lassie! This working dog originates from Scotland where they were primarily used to help herd sheep. Today, you can find this fluffy dog breed in homes across the world, as they are very affectionate towards their owners and even love playing with children. Did you know Queen Victoria even had a Rough Collie? They may be small, but what they lack in stature, they make up in high velocity. These little white fluffballs have adorable curly fur that looks incredible when blown out. Newfoundlands, otherwise known as Newfies, originated in Newfoundland, Canada. While their size may be intimidating to some, they are known for their loyal, calm dispositions. They also make really great lifeguards because of all their muscles. Baywatch Newfie edition?! Yes please. The American Eskimo is another breed that originates from the Spitz family. In many ways Eskies are larger versions of Pomeranians. This white fluffy dog come in three sizes – small, medium and large (or in fancy schmancy dog terms: Toy, Miniature, and Standard) and are popular for their puffy white fur and watchdog skills. One of many white fluffy dog breeds. The original Puff Daddies, Poodles come in different variations – Standard, Miniature, and Toy. They are known for their super posh, cutting-edge, high-fashion haircuts at dog shows, but the average Poodle on the street generally rocks a shorter ‘do. One thing that a lot of people don’t know about Poodles is that they’ve got some awesome, Olympic-level agility skills. They’re also one of the brightest breeds around. The Old English Sheepdog is a very large dog with a very silly personality. Bred as herding dogs in England, they make great family pets. Sheepdogs have long shaggy fur that sometimes covers their eyes, making them look (and act) like total adorkable goofballs. While their look may not immediately scream “fluffball”, these silken, velveteen beauties are furry beyond belief. The all-American Golden makes a great, loyal family pet. When your Golden curls up at the end of your bed at night, you will be enamored by their precious sleepy sweetness. Keeshonds aren’t quite as well known as other fluffballs, but their extreme fur levels land them on this list. These pups originated in Germany and count the Pomeranian and Spitz their closest cousins. Their fur is silver and black and thick all over. The Spitz kind of looks like a fluffier version of a fox with pointy ears and a longer snout. They have curly, fluffy tails that look a lot like a Pom’s, but they are typically larger in size. Fun fact: Even though this fluffy white dog may look super posh, genetic testing puts them in a group closest to wolves. Talk about fierce. Bred to withstand very cold temperatures, the Husky’s coat is thick, luxurious and keeps them super warm from the cold. It’s also insulated in case they get wet while romping in the snow. This is just one of many large fluffy dog breeds. Even more prepared than the Husky to survive in Arctic temperatures, Malamutes also have huge body mass. Bred to pull sleds across the snow over long distances, these pups are floofy but noble. This big white fluffy dog breed was bred to guard livestock, Pyrs (as they’re known by their humans) originated in Europe. Naturally nocturnal, their white, fluffy, dense coats also have a double coat to keep them warm. These pups are ancient, having been used by shepherds for thousands of years, with mentions even by writers in Ancient Rome. This big white fluffy dog could be a great addition to any family. What could be better than a big fluffy white dog? Looking for a big fluffy dog? Berners, as they’re affectionately nicknamed, originated in the Swiss Alps. First kept as a general farm dog, they’ve also been traditionally been used for drafting. Their tri-colored, gorgeous coats are known for their white chests, known as the “Swiss Cross.” BTW, we highly recommend checking out some photos of their adorable fluffy puppies! Another herding breed, Aussies were actually developed in the U.S. by ranchers, and are known as cowboy dogs. While their ancestors originated in the Basque regions of Europe, many farmers migrated by way of Australia to the U.S. Admiring the pups and thus thinking they were originally Australian, a misnomer was born. Out of all the big fluffy dog breeds, the Saint Bernard may just be the fluffiest. Before they were Hollywood famous (Beethoven, ah, such a childhood movie classic), these pups also originated in the Swiss Alps. Developed by monks in the early 1000s (in fact one of them, St. Bernard of Menthon, is where they get their name), they were used to find and rescue travelers buried by massive snow drifts in mountain passes. Fun fact: they did not originally carry casks of brandy around their necks. Although they may look to have the mane of a lion, there really is a dog under all that fur. This big fluffy dog breed originates from Tibet, where they would act as guard dogs for the monasteries and monks. Sporting a double coat, this canine is sure to bring some warmth to your home. This fluffy dog breed, which is also known as Groenendaels, is a highly capable herding dog that originates from Belgium. These intelligent pups have a thick coat of beautiful, black fur, but they won’t be scared to get it dirty chasing off those backyard intruders! Strikingly similar to the thick coat of the Siberian Husky, Akita Inus are among Japan’s oldest dogs, and have accompanied us as 4-legged companions for centuries. Dominant, intelligent, and courageous, this breed is best suited for an experienced dog owner. Looking for a fluffy dog? Want to find a fluffy single near you? Download BarkBuddy and swipe right to add a four-legged family member to your pack! 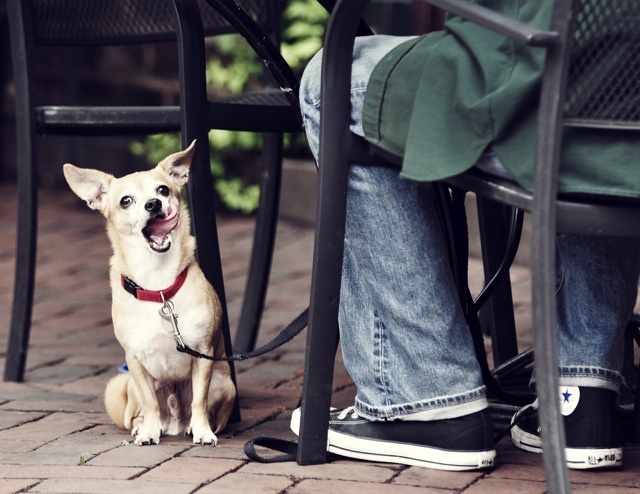