Four years ago, Lilly’s life changed when she lunged in front of a barreling freight train to save her unconscious owner in Shirley, Massachusetts. On that fateful day, this hero Pit Bull lost her leg, but saved her human, Christine Spain, proving to the world that these misjudged canines make incredible companions.

Today, Lilly is one of the most recognizable Pit Bulls around, having been photographed, written and talked about for her bravery. And she’s using that fame to help other dogs and humans.

Boston Police Officer David Lanteigne found Lilly at the Animal Rescue League seven years ago when he went to volunteer. It was Lilly’s gentle demeanor that attracted David. She went right up and pushed against the crate door, seeking warmth. When Lanteigne took her for a walk, she jumped in the back of his truck, leaving him with no choice but to bring her home. He gave Lilly to Spain, his mother, who was frequently home alone. Spain pampered Lilly with homemade meals, daily walks, and lots of love. Lilly returned the favor by putting her life on the line. Lanteigne said that if his mother could do it over, she’d happily walk right in front of the train instead of Lilly.

Lilly suffered serious injuries when the train hit her. The dedicated veterinarians at Boston’s Angell Animal Medical Centers did the best they could to heal her. Her front right leg was amputated, and she underwent surgery to fix her pelvis and a badly injured left hind leg. With an outpouring of love and support from thousands around the world, and physical therapy that followed, Lilly braved her ordeal and became a source of inspiration. Before he adopted Lilly, Lanteigne didn’t know much about Pit Bulls, but he soon realized how differently he and Lilly were being treated simply because of her breed.

Not only is [sic] Lilly been prejudiced against, I’ve also received dirty looks. Little do they know, I’m a police officer trying to help people and that I am a good person. To get judged like that is offensive.

Ever since that frightening spring day, Lilly went from being judged to becoming a beacon of hope. The tragedy resulted in the creation of the Lilly’s Hero Pit Bull Fund, a nonprofit which raises money for shelter dogs, families of Pit Bulls in need, and abused dogs through social media. Lilly’s team, which includes Lanteigne and Lindsay Dancy, has raised close to $100K since 2012; they have helped a few hundred dogs, with nine out of ten being Pit Bulls.

Dancy, who runs the Facebook page with over 422K followers, tirelessly responds to messages and collaborates with various animal control and rescue groups to help Pit Bulls all over the country.

A year ago, a Pittie named Coco came to Dancy’s attention. Her owner didn’t have the money to treat the spinal injury causing Coco’s paralysis. With outreach on Facebook, Lilly’s Hero Pit Bull Fund raised a few thousand dollars to get a wheelchair and physical therapy for Coco. Now, Coco is a happy dog who has regained movement in her legs. Lilly’s Fund recently raised $1,300 for a Rhode Island family who lost their home and were forced to keep their dog, Mama, in their car because they couldn’t bring her to the shelter. Thanks to the money raised, they were able to find boarding, get Mama spayed, and administer the required shots.

Without what Lilly did, how she saved David’s mom, I wouldn’t be able to help other dogs. It has taken over my life. It’s good and bad, and it’s hard to escape. But the impact and help that we can offer to shelter dogs and families who need vet care is insane. We get to help dogs who might have been discarded or euthanized. That means a lot to me.

The 13-year-old hero currently lives with Lanteigne, his fiancé, and her dogs. Not only is Lilly the face of the Fund, but she keeps her schedule busy with visits to schools and businesses, where she dispels misconceptions about her breed.

Lanteigne’s educational presentations involve the teacher reading one of Lilly’s National Geographic books to the students, using coloring sheets, and of course include plenty of one-on-one time with the hero herself. 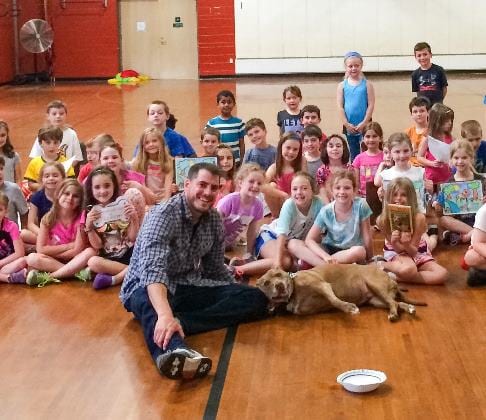 It’s all about advocating for pit bulls. These are young kids and we teach them to not believe everything they hear, to get to know the dog, and not just base it off of rumors.

Lilly recently started accompanying Lanteigne to meetings with recovering addicts, where she provides comfort to those trying to get into sobriety programs. Lanteigne says having Lilly with him has helped foster relationships with law enforcement and people in need recovery.

Despite the strides Lilly’s loving personality and her moving story has made in changing the perception of the breed, there’s still a long way to go. There are states that stick to breed-specific legislation, landlords who refuse to rent to Pit Bull owners, and people who reject these amazing dogs simply because of their appearance. Thankfully, lovers of Lilly and all Pitties are fiercely fighting for these dogs’ rights. To follow Lilly’s adventures and find out how to help her friends in need, visit the Lilly The Hero Pit Bull Facebook page.