Home » Fun » From Yorkies To Pitties: 20 Of The Bravest Military Dogs In History

Of all the wonderful traits dogs possess, it is perhaps their loyalty that endears them to us most of all — and with good reason. There is no shortage of stories about dogs laying their own lives on the line to protect, defend, or save humans. These military heroes took that sentiment to a whole new level when they enlisted in the Armed Forces and selflessly saved countless lives.

We start off the list with probably the most famous and highly decorated WWI American dog, Sgt. Stubby. Stubby’s list of bravery is incredible. First, he caught a German spy mapping Allied positions. Then, in Feb. 1918, Stubby’s battalion was hit by a poison gas attack. Stubby survived, and his nose became acutely sensitive to gas attacks. During the next poison gas attack, Stubby sniffed it out early, woke the soldiers and saved their lives. 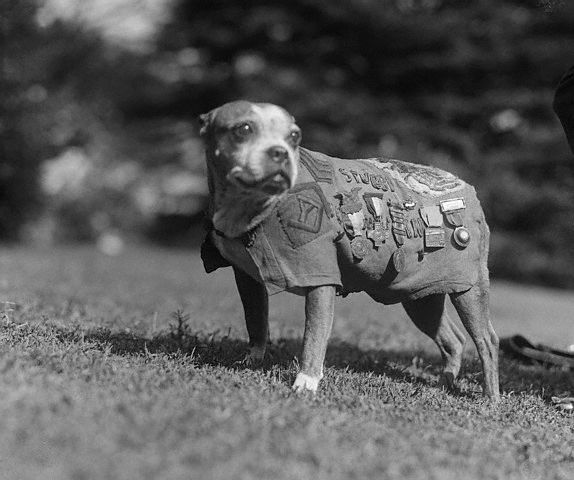 Stubby also became an expert in finding wounded and deceased soldiers. He was even injured by shrapnel from a German grenade. When Stubby returned home, he was a hero of monumental proportions. Get this: Stubby met three presidents (Woodrow Wilson, Warren Harding, and Calvin Coolidge), led hundreds of parades, and became the official mascot of Georgetown University! The next hero on our list is Valdo. Valdo is a bomb-sniffing dog based in Afghanistan. Valdo, along with his handler, Petty Officer 3rd Class Ryan Lee, trained nearly every day to save lives with Valdo’s incredible nose. However, Valdo did much more than that.

During a mission in 2011, Valdo shielded four troops against a rocket propelled grenade and took on the brunt of the shrapnel (VIDEO BELOW). Valdo was seriously injured. Pfc. Bradley said afterwards, “If Valdo wasn’t here, I’m pretty sure I’d be dead right now.” Luckily, Valdo recovered from his injuries and Lee says he hopes to adopt the brave dog. Lucca, an amazingly brave military dog who was severely injured in the line of duty, is truly an inspiration. In March 2012, Lucca lost her leg while protecting a platoon of Marines from a roadside bomb. Lucca’s story is featured in the video below. It is a MUST WATCH.

Our next hero proves that size does not matter when it comes to serving your country and saving lives. Smoky, a 4-pound Yorkshire terrier, was found in the jungle of New Guinea and purchased by American soldier Bill Wynne. During WWII, Smoky earned honors for bravery after she warned Wynne of incoming fire on a transport ship. Another amazing WWI hero dog was Rags. Rags, a Cairn Terrier mix, was found by Pvt. James Donovan in Paris. Donovan returned to his division with Rags, and the pup soon became a carrier dog, delivering messages over dangerous battlefields to Allied troops. Rags and Donovan were seriously hurt in a gas attack. Donovan died from the complications, but Rags made a full recovery and became a celebrity around the country. Rags made the rank of lieutenant colonel and when he died, Rags was buried with military honors. 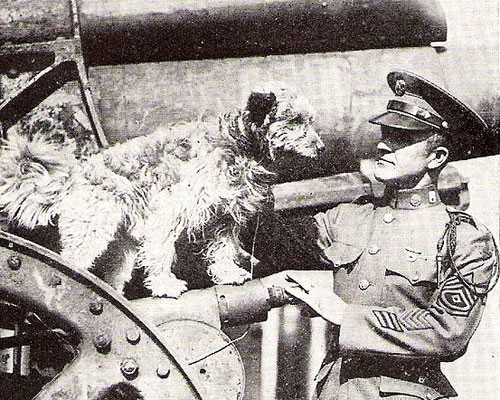 The most decorated American K9 that served in World War II was Chips. Chips, a German Shepherd/Collie/Husky mix, was deployed to North Africa, Sicily, Italy, France and Germany.

During the invasion of Sicily in 1943, Chips and his handler were pinned down by machine gun fire. Chips broke free and attacked the enemy gunmen, pinning them down and eventually forcing their surrender to American troops. Chips was awarded the Silver Star and Purple Heart, although later rescinded because at the time dogs could not receive those awards. He did however receive many more accolades over his life. One of the strangest additions to our list is that of Moustache, a black poodle in the French army. While parts of his story are believed to be fictitious, his most heroic moments occurred at the Battle of Austerlitz in 1805. Moustache detected and cornered an Austrian spy, then carried back the French flag to camp after losing a leg. Moustache received a medal for his amazing bravery. A black lab named Sarbi became only the 2nd Australian animal to receive the Royal Society for the Prevention of Cruelty to Animals’ purple cross, the nation’s most prestigious animal bravery award.

Sarbi was deployed as a bomb-detecting dog in September 2008 when her unit was hit by Taliban militants. Nine soldiers, including Sarbi’s handler, were wounded in the attack. Sarbi was separated from the unit and survived a full year inside the Taliban heartland before being found at a remote patrol base in northeastern Uruzgan and reunited with her handler. The tenth hero dog on our list is Sallie, a brindle Staffordshire Terrier who served as the regimental mascot for the 11th Pennsylvania Volunteer Infantry during the Civil War.

Sallie was raised in the regiment and accompanied the soldiers into battle, always on the front line. At Gettysburg, Sallie became separated from the regiment. Troops found her three days later guarding the bodies of the wounded and dead. Sallie was later killed at the Battle at Hatcher’s Run. In 1890, the surviving veterans dedicated a monument at Gettysburg with the likeness of Sallie. The Vietnam War also had its share of war dog heroes. One in particular was Nemo the German Shepherd. Nemo was paired with Airman Second Class Robert Thorneburg.

On December 3rd, 1966, while on patrol, Thorneburg was shot in the shoulder and Nemo was shot in the muzzle. The bullet entered under Nemo’s right eye and exited through his mouth. Nemo ignored the wound and heroically charged the 4 gunmen, allowing Thorneburg time to call for reinforcements. Both man and dog were rushed to medical treatment, and Nemo was sent back to the U.S. for treatment, where he was able to live out the rest of his life a hero. Another incredible British war dog was Judy, the English Pointer. Judy’s entire story can be read here, for it is far too long and incredible for this meager synopsis. Judy was saved by Frank Williams in a POW camp, but she soon returned the favor. I will summarize Judy’s bravery by saying she survived a torpedoed ship, found fresh water that saved soldiers’ lives, was a prisoner of war…twice, survived another torpedo attack, rescued soldiers from the sinking ship, attacked prison guards when they beat the POWs, and fought tigers and alligators. Yes, you read that right…tigers and alligators. Judy and Williams were freed from the camp in 1945. Once home, Judy received the Dickin Medal for her tremendous bravery. Judy and Williams remained inseparable for the rest of their lives.

Gander was a member of The Royal Rifles of Canada during the World War II. The unit was sent to Hong Kong Island to defend it from Japanese attacks. Gander’s first act of bravery was charging a group of Japanese soldiers as they approached some wounded Canadian soldiers. This act most likely saved their lives.

Unfortunately, Gander’s final act of heroism cost him his life. During the Battle of Lye Mun on Hong Kong Island on Dec. 19, 1942, Gander picked up a grenade that landed next to a group of soldiers and carried it away. The grenade exploded, instantly killing him. Gander saved the lives of many soldiers that day, and on Oct. 27, 2000, he was posthumously awarded the Dickin Medal for his extreme act of courage.

This amazing dog showed his loyalty and bravery in the midst of battle. While deployed in Fallujah with his handler, Cpl. Dustin Lee, the pair were struck by a mortar. Lee was fatally wounded in the attack. Lex, his faithful companion, was struck by shrapnel, but managed to crawl over to Lee and lie on top of him, protecting Lee until medics arrived. Other Marines reportedly had to pull Lex away so Lee could be attended. Although some shrapnel remains in Lex’s body, he recovered. Lex was allowed to retire honorably and live out the rest of his days with Lee’s family, who adopted the heroic dog. Sinbad stayed on board the ship while it was getting towed and repaired, even as most other soldiers transferred to other vessels. Sinbad retired and in 1951 was laid to rest at the Barnegat Light Station beneath the station’s flagstaff. 17. The Dobermans of World War II

Our next hero, or should I say heroes, consisted of multiple Doberman dogs that accompanied soldiers in the Pacific assaults during World War II. Marine line officer William Putney, who fought side by side with these dogs, said “These dogs lived in foxholes with their men. Their handlers killed 301 enemy soldiers with the loss of only one of my men on patrols. So the fact that these dogs were killed instead of us and kept us from ever being ambushed or surprised at night makes them heroes in my mind.” The first canine casualty was Kurt. Kurt was leading troops on a mission in Guam, when his amazing sense of smell and hearing alerted the troops of surprise attack by the Japanese. Just as the unit took cover, Japanese mortars and grenades rained on the soldiers. Kurt was fatally wounded. His handler, Private First Class Allen S. Jacobson, tried to save Kurt all night, and was so tired after Kurt passed, that he put his head on the dog and fell asleep. To learn more about these incredibly amazing dogs in the Pacific and the memorial dedicated to them, watch this video. You won’t regret it.

Sam was a heroic dog deployed to help the conflict in Bosnia-Hertzegovina. In 1998, Sam gave chase to an armed gunman who opened fire on civilians in the town. Sam caught the man and took him down, allowing his handler, Sergeant Iain Carnegie, time to disarm the gunman. Six days later, a mob armed with crowbars, club and stones, surrounded a group of nearly 50 Serbs. Sam bravely fought back the mob countless times until reinforcements could arrive. Sam was posthumously awarded the Dickin Medal for his acts of valor and bravery.

Bob, a Collie-mix, has a special distinction bestowed upon him. During World War II, Bob led more forays into German territory than any other U.S. soldier, human or canine.

The final dog on our list was a pioneer. Beauty, a wire-haired terrier, served during the Second World War, and is considered to be the first rescue dog.