William Wegman And His Legendary Weimaraners

We’re sure you’ve seen his iconic work, but do you truly know the art of William Wegman? 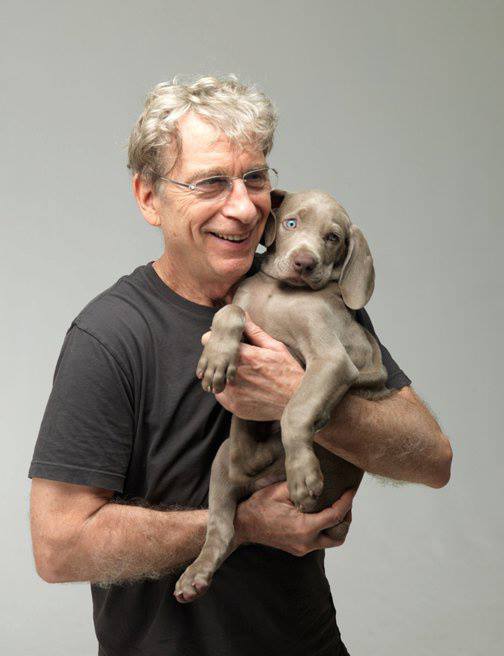 Wegman is known for his minimalist artwork starring Weimaraners in interesting poses — often wearing human costumes. One of Wegman’s first dogs, Man Ray, became the initial muse for his artwork. After Man Ray sadly passed away in 1982, Wegman got another dog and named her Fay Ray. He began shooting photos of Fay Ray with a Polaroid 20 x 24 camera. Fay Ray had puppies which meant — more Weimaraners and more photo ops! His unabashed love for Weimaraners has garnered a great deal of success and his work has been featured in domestic and international exhibitions for the last forty years. He has also written children’s books as well as books for adults – all of which feature dogs! It is obvious with one glance that the Weimaraner is Wegman’s breed of choice. Many of his photographs feature these handsome pups who, even with their slightly somber faces, still manage to make humorous and whimsical photographs. These gorgeous dogs, are sometimes referred to as “Gray Ghosts” due to their sleek, silver fur. They hail from Germany and were originally bred to assist hunters with handling bigger game. Much like Pugs or Bulldogs, Weimaraners have very human-like expressions, which Wegman capitalizes on in his work. By dressing them up in different costumes and amusing poses, Wegman displays a humorous side to their (usually) straight-faced expressions. These fearless, obedient, alert, and athletic pups may not be the first ones that pop in your mind as dog models but, as you can see, they are truly photogenic. As the years have gone by, Wegman’s love for Weimaraners has only grown. Now at 72 years of age, Wegman is still demonstrating his adoration for this remarkable breed. From his studio in Chelsea, NYC Wegman is still creating simple yet unforgettable photography. If you’re loving Wegman’s work, follow his facebook page! It’s a treasure trove of Weimaraners! New photos are frequently posted and there are some great #TBT posts. Don’t forget to check out his personal website too! There is no such thing as too many Weimaraners in your life!

We’re so pumped that William Wegman has made Weimaraners a household name! They are truly hypnotic — Don’t ya think?