Home » Health » When Your Dog Looks In The Mirror, Their Face Is The Last Thing They See

When Your Dog Looks In The Mirror, Their Face Is The Last Thing They See

In the 1970s, psychologist Gordon Gallup Jr created the "Mirror Self-Recognition Test" (MSR). It determines if animals could recognize themselves when looking in the mirror. If they do recognize themselves, it means that the animal possess self-awareness, or a sense of self. Our canine friends fail the mirror test. However, that doesn't mean dogs don't have a sense of self. Primatologist Frans de Waal, author of Are We Smart Enough to Know How Smart Animals Are?, recently told New York Magazine's Science of Us that "self-awareness is a broader concept than" the mirror test for animals. "And I cannot imagine that a cat or a dog — even though they don’t recognize themselves in the mirror — I find it hard to imagine that they have no awareness of themselves," de Waal told NY Mag. So, instead of using the mirror test models, researchers have used other ways to study self-awareness in dogs. Science of Us used Marc Bekoff's Yellow Snow Study as an example. Unhappy with how dogs are said to have no self-awareness because they failed the "mirror test", the animal cognition researcher created a new test with his dog, Jethro, as his subject. Whenever Jethro would urinate during their walk, Bekoff would move the pee as well as the pee of other others, wrote Science of Us. And he said he did this for five winters. [bp_related_article] While it may sound gross, Bekoff may have been onto something as we already know how powerful a dog's sense of smell as they could do a lot with their noses, like sniff out animal fecal of endangered species for research or to keep us safe when traveling. In Bekoff's study, he found that Jethro showed less interest in his own urine, which could point to a sign of self-recognition. 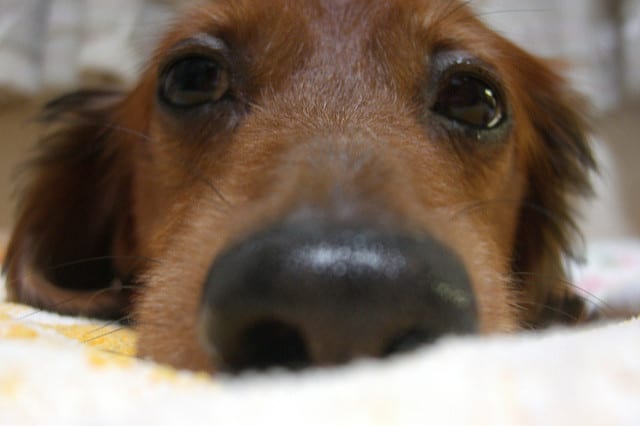 Canine cognition specialist Alexandra Horowitz expanded Bekoff's study in her lab with more dogs---three dozen to be exact---and found similar results as Bekoff's study. In her own study, Horowitz, who heads the Dog Cognition Lab at Barnard College, not only presented a dog its own urine in a canister as well as other dogs' urine, but she also added another scent to a sample of their urine to make it more difficult to identify. However, Horowitz told Science Of Us: "I don’t think it’s a self-awareness test, exactly. But it does say something about identity." In the end, what does this all means in regards to a dog's sense of self? Bekoff told Science of Us that our canine friends could have a "sense of mine-ness and this sense of body-ness" but it's just not as complex as human's sense of self.
Featured image via Flickr/ 6SN7
H/t to NY Mag